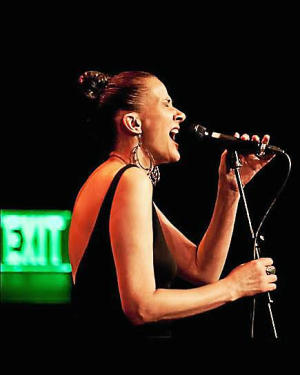 BENNINGTON —The woman who started it all, Tessa Souter, will perform at the Masonic Hall as part of the Vermont Arts Exchange (VAE) Basement Music Series this Saturday.

The award-winning female jazz singer based out of New York City will take the stage with guitarist Freddie Bryant, specializing in jazz and classical music, according to a release from VAE. Souter is said to have opened up the first basement show in 2004 with referral from Robin and Alex Kershaw. Executive Director Matthew Perry utilized his big basement, Bob Hemmer’s light and sound production and decided to launch a party which became what it is today.

Souter hails from England and is the offspring of Trinidadian and English parents. Her music can be considered an “emotional rollercoaster” by the singer herself. The Boston Globe qualifies Souter as “one of the finest and most fearless vocalists to have emerged in recent years.”

“It’s hard to describe your own kind of music,” Souter said. “Its funny, it’s tragic, it’s all different things; a mini rollercoaster. I mean everything. I can’t sing it if I haven’t experienced it. I have been through everything I see and I think that’s important.”

One of the things Souter noticed when performing outside of a city scene is that the audience appreciates the performance and some drive from long distances.

“The last time I performed it was sold out with super cultured people desperate to hear some music and I don’t know how much opportunity they get to see live music,” she said. “It wasn’t like people were taking it for granted like people do in New York. I get that feeling in the countryside that people are very happy when you’re there. They seem very appreciative.”

She sees the series as a house concert and more of a social event where people know each other.

“It’s got a party vibe. Everyone is listening but it’s very much a house concert, and sort of personal and intimate,” she said.”

Souter thinks that if music has meaning then its considered authentic. She shared a story about her god daughter turning her onto Adele a few years ago because the singer talked about real life experiences, similar to what Souter sings about. On the contrary, she disapproves of singers making money off of other people’s work without giving credit. She mentioned that in the late 1900’s, a wider variety of music was being heard versus modern day with radio stations being paid to play certain genres.

Bryant received his Bachelors degree from Amherst College in 1987 and a Masters degree in classical guitar from the Yale School of Music later on. Previously he served as a professor of Africana Studies and music departments at Williams College in Mass. His worldly experience of touring in over 50 countries has lead to collaborations with musicians such as Shubhendra Rao, Achien’g Abura, Suzanna Owiyo and Zein Labdin. This has also seeped into his music and allowed him to tour as a cultural ambassador for the U.S. Department of State four times at the Kennedy Center.